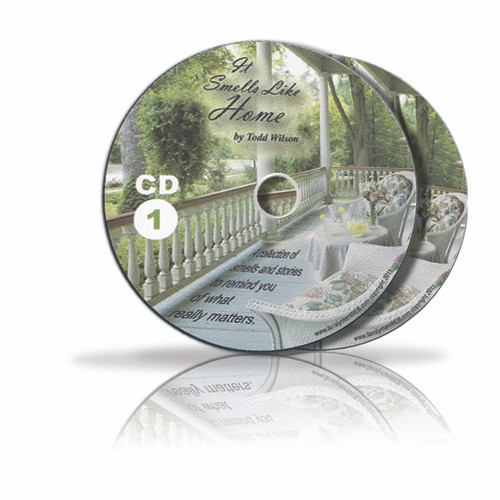 This unique two CD collection of smells and stories is guaranteed to refresh your heart, reminding you of what really matters.

"In the movie made in the 80's, "Throw Mama from the Train" there is a scene where one of the main characters played by Danny Devito shows his co-star, Billy Crystal, his coin collection. Danny leaves the room to get his collection and the audience is left anticipating the shiny doubloons and other rare coins that must make up his wonderful collection. A moment later Danny proudly scurries into the room holding a small box.

Plopping himself down on the floor, he dumps his coins out in clear view for all to see, but to the chagrin of the audience and his new friend they're just ordinary dimes, pennies, and a quarter or two. His eyes sparkling, Danny tells the stories behind each coin. They were part of some left over change from the outings he had with his father who had died years earlier. These coins were all that remained of the good memories he and his dad shared. His mother is less than kind to him hence the title and the plot of the movie.

Those ordinary coins were the keys to wonderful memories, stored, not in a box, but in his heart. Romantics across the globe, upon seeing that scene, got a lump in their throats and knew exactly what he felt - I guess that's why I collect smells. They aren't smells at all, but good feelings that have been impressed on my soul by a smell. Most of the smells that clutter my collection I couldn't recall if pressed, but on those rare occasions when I come upon one of them it greets me like an old friend and is as familiar as if it were admired daily.

I'm a simple man (my favorite meal is hot dogs and macaroni and cheese) so most of my favorite smells aren't very glamorous. They have nothing to do with the smell of the ocean on a Caribbean moonlight vacation, or exotic flowers blooming on some island paradise they're just plain ordinary Midwest smells, but they're smells that instantly create a warm feeling deep inside.

These are the smells that I've collected over the course of my life that I'd like to share with you. So close your eyes, and take a deep breath as we plop down on the floor and open up my little treasure box of smells."